Rosemary Griebel’s award-winning poetry has appeared in The Best Canadian Poetry in English, on CBC Radio, literary magazines, anthologies, chapbooks and on public buses. Her long awaited collection of poetry, Yes., was published by Frontenac House in 2011, and was short-listed for the Stephan G. Stephansson Award for Poetry as well as the Gerald Lampert award and the Pat Lowther Memorial award. She lives in Calgary with her husband and two cats and is currently working on a project to build a bold, new Central Library in Calgary’s East Village. 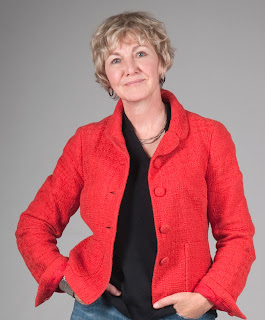 Rhona McAdam has published five poetry collections (most recently Cartography, from Oolichan) and two chapbooks of food poems: Sunday Dinners (JackPine) and The Earth’s Kitchen (Leaf). Her first nonfiction book,  Digging the City: An Urban Agriculture Manifesto, is published by RMB in 2012. She writes a food and poetry blog (The Iambic Café) and lives in Victoria. 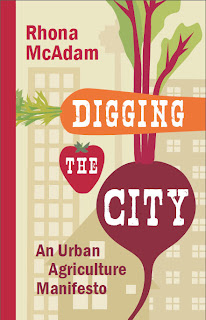 
edited by Yvonne Blomer and Cynthia Woodman Kerkham
with an introduction by Patrick Lane.

The most fabulous poetry readings this town has ever seen!


Paul Nelson, Seattle, Washington: "I LOVE the Canadian side of Cascadia as it deals with poetry. In Victoria, Vancouver, Nelson and elsewhere there are retired poets constructing Mesostics, discussing Jack Spicer and Robin Blaser and generally being open to more innovative work. This includes the Planet Earth Poetry series. Its wide aesthetic, its open and welcoming environment and its audience. They pay attention and actually buy books. & there's matcha! What else does a poet need? Viva Planet Earth Poetry!"
Yvonne Blomer is the Artistic Director of PEP and author of The Book of Places (Black Moss) and Bicycle Brand Journey(JackPine Press). She is forthcoming in 75 BC Women Poets(Mother Tongue Press) and A Crystal Though Which Love Passes: Glosas for P.K. Page(Buschek Books). Her collection Caged(Palimpsest Press) is forthcoming in 2014.

Cynthia Woodman Kerkham has won the Federation of B.C. Writers Literary Writes Competition and the Malahat Review's Open Season Award for poetry. In 2012, her poem "In Praise of Mushrooms" was selected for B.C.'s Poetry in Transit. Good Holding Ground,her debut collection of poems, was published in 2011 by Palimpsest Press.

Cover design by Rhonda Ganz
photo by Chris Hancock Donaldson (chrishancockdonaldson.com )
Rocks and leaf from a photo by Savannah Featherstone 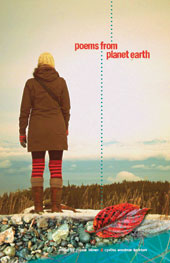 Planet Earth Poetry welcomes 2013 with an All Open Mic night, so write new poems to bring in a New Year. We hope to relieve some of the building pressure on the open mic list by letting you all have at it on Friday, January 18, 2013. And... we are celebrating this, our 18thyear of poetry at Planet Earth, so let's make it extra magical!

(both edited by Patrick Lane)

LAUNCH OF BEST CANADIAN POETRY IN ENGLISH and

*Carla Funk, Steve Noyes, and Catherine Greenwood will appear on U in the Ring on CFUV 101.9 FM Tuesday, January 29th, 4-5 p.m. Yvonne Blomer and Colin Dower will co-host. 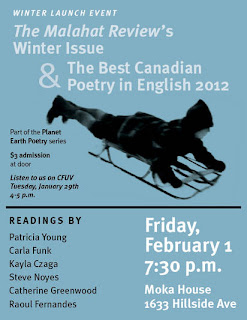 Poets find inspiration in all manner of human experience, from the comical to the sombre. The creative processes by which they grow their poems to fruition are as diverse, and often as quirky, as their subjects. But what all poets have in common is their captivation by the work and lives of other poets, living and dead. Poet to Poet is a unique anthology that honours, and probes, this peculiar enchantment. Featuring work by Canadian poets written to, about, or in the manner of other poets, each poem is accompanied by a back story that provides a glimpse into the creative cauldron and the poetic communion of kindred spirits. 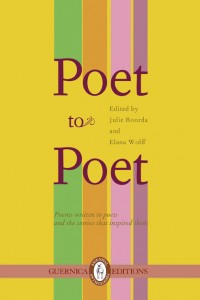 February 15
PATRICIA ROBERTSON AND ERLING FRIIS-BAASTAD
Born in the UK, Patricia Robertson grew up in British Columbia and received her MA in Creative Writing from Boston University. Her most recent book is The Goldfish Dancer: Stories and Novellas. She was 2010-11 writer-in-residence at Haig-Brown House in Campbell River. Currently she is a creative writing instructor at Yukon College in Whitehorse, a freelance writer/editor, and a contributing editor for CNQ.
Born in Norway, Erling Friis-Baastad grew up in the United States, emigrated to Toronto in 1969, and moved to the Yukon in 1974. His earlier collection, The Exile House, was published by Ireland’s Salmon Publishing in 2001. His poems have appeared in a number of chapbooks as well as in many literary journals and anthologies, including The Malahat Review, Grain, Poetry Canada and Canadian Forum. A longtime book reviewer and journalist, he currently works as an editor with the Yukon News in Whitehorse.

Steven Price was born and raised in Colwood, BC. His first collection of poetry, Anatomy of Keys (Brick Books, 2006), won the Gerald Lampert Award and was named a Globe & Mail Book of the Year. His work has appeared in Canadian and American literary journals. He is one of the poets in Breathing Fire 2: Canada's New Poets, edited by Lorna Crozier and Patrick Lane. Price graduated from the University of Virginia Writing Program, and currently teaches poetry and writing at the University of Victoria. 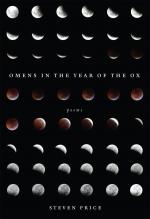 Lorna Crozier is an Officer of the Order of Canada and the recipient of three honourary doctorates that acknowledge her contribution to Canadian literature. An award-winning author, including the Governor-General’s Award, her work includes a memoir and fifteen books of poetry, most recently, The Book of Marvels: A Compendium of Everyday Things, listed as one of The Globe and Mail’s top 100 books of 2012. She has edited several anthologies, including Best Canadian Poetry 2010 and has read her work on every continent except Antarctica. Born in Swift Current, Saskatchewan, she now lives on Vancouver Island, where she is a Distinguished Professor at the University of Victoria.Please visit www.lornacrozier.ca. 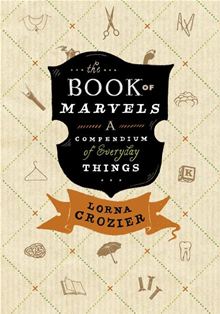 Disease and desire, mothering and the mundane propel Kim Clark’s ongoing journey between poetry and prose. Her debut fiction collection, Attemptations(Caitlin Press), was launched in 2011 and one of its novellas has been optioned for a 90 minute feature film. Her chapbook, Dis ease ad De sire, the M anu S cript (Lipstick Press), came out in April, 2012. Kim’s work can also be found in Body Breakdowns (Anvil Press), theMalahat Review, and e-zines and other publications in Canada and the U.S.. She lives in Cedar on Vancouver Island.


Terence Younglives in Victoria, B.C., where he teaches English and creative writing at St. Michaels University School. He is co-founder ofThe Claremont Review, an international literary journal for young writers. His first book of poetry, The Island in Winter(Signal Editions, 1999), was shortlisted for the Governor General’s Award and the Gerald Lampert Award. Since then, he has published a collection of stories, Rhymes With Useless(Raincoast, 2000), which was one of two runners-up for the annual Danuta Gleed award, a novel, After Goodlake’s, which received the City of Victoria Butler Book Prize in 2005, and a second collection of poetry, Moving Day(Signature Editions, 2006), which was nominated for both the Dorothy Livesay Poetry Prize and The City of Victoria Butler Book Prize for 2006. In 2008, he was awarded the Prime Minister's Award for Teaching Excellence, an honour shared with fifteen other teachers from across Canada that year. A second collection of fiction, The End of the Ice Age, was released from Biblioasis Press in the spring of 2010. A story from that collection, "That Time of Year," was included in Oberon Press's recent edition of Best CanadianStories 11 (2012). 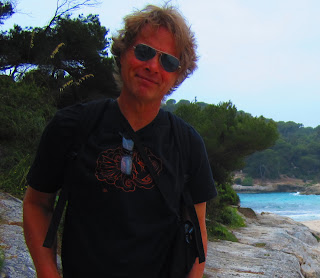 Al Rempel is launching his latest book of poetry called This Isn’t the Apocalypse We Hoped For. His previous books include understories(Caitlin Press, 2010) and a chapbook called The Picket Fence Diaries(Lipstick Press, 2010). His poems have also appeared in The Malahat Review,CV2,Event,The Best Canadian Poetry in English (2011),and Rocksalt.More information can be found at http://alrempel.com/. He currently lives in Prince George.

DavidFraserlives on Vancouver Island. He is editor of Ascent Aspirations Magazine. His poetry has appeared in many journals and anthologies, includingRocksalt, An Anthology of Contemporary BC Poetry, Mother Tongue Press, (2008) and Walk Myself Home, Caitlin Press, (2010). He has published five collections of poetry,Going to the Well(2004), Running Down the Wind (2007),No Way Easy, (2010), Caught in My Throat, (2011), and Paper Boats, (2012), and a book of poetry and poetics, On Poetry, (2012) with Naomi Beth Wakan. He is the artistic director for Nanaimo’s spoken-word series, WordStorm. www.wordstorm.caand a member of the League of Canadian Poets. Home Site:www.davidpfraser.ca

Posted by Planet Earth Poetry Victoria BC at 16:07 1 comment: